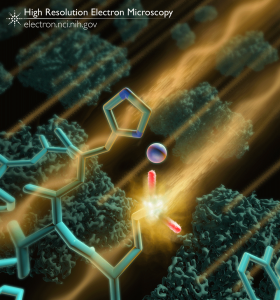 Imaging with electrons allows researchers to discern atomic details of large, complex molecules like proteins. During the imaging process, the interaction of electrons with the molecules being imaged inflicts damage that can alter the structure. Cryogenic temperatures (cryo-EM) can reduce the extent of this damage, but as we showed in a recent study, some parts of the protein such as glutamate and aspartate residues are more susceptible to damage than other types of amino acids.

The latest generation of detectors (cameras) collect a series of “movie frames” instead of a single, long exposure. By using only the portions of the exposure with the least damage, it is possible to improve the quality of the final electron density map.

This image is an artistic representation showing an electron striking and interacting with a negatively charged glutamate side chain within the protein β-galactosidase. 3D cryo-EM derived maps of β-galactosidase are shown in the background.