Stepping into a Melanoma Cell 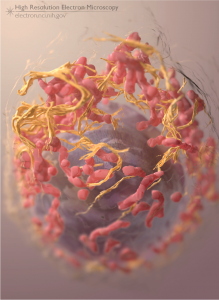 The image above shows the internal organization of a melanoma cell, a cancer cell descended from pigment-containing skin cells. This image was generated from data acquired with focused ion beam scanning electron microscopy (FIB-SEM), a method for 3D imaging of cells that we have been developing in our laboratory for several years. In a study published in the Journal of Structural Biology in 2009, we used this technique to show the 3D arrangement of organelles inside cells, including the nucleus, endoplasmic reticulum, mitochondria, as well as pigment granules, which are the hallmark of melanocytes and their cancerous cousins, melanoma cells.

This image shows the nucleus in purple in the background, with endoplasmic reticulum (orange) and mitochondria (red) in the foreground. The cell membrane appears as translucent shadowing around the upper edge of the image.