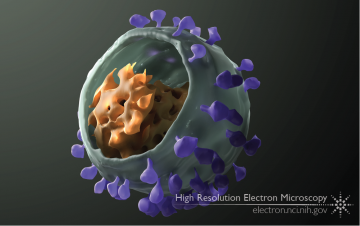 The simian immunodeficiency virus (SIV), like its close relative human immunodeficiency virus (HIV), infects immune cells (such as T cells) using its envelope glycoprotein spike. Many copies of this spike dot the membranous outer surface of the virus, while the virus’ genetic material is packed within, inside a conical core. Individual copies of the virus, or particles, can be visualized with cryo-electron tomography, a cryo-EM technique that allows one to gain 3D information of individual, sub-microscopic objects.

The envelope glycoprotein spike binds to proteins on the surface of T cells, enabling the virus to infect the cell. Most strains of SIV, like HIV, first bind to the receptor CD4, and only after that bind to a co-receptor, either CXCR4 or CCR5. However, there are a few strains of SIV that don’t seem to require CD4 at all before binding the co-receptor.

In a study published in 2010, we analyzed the shape of glycoprotein spikes on HIV and several strains of SIV, including one that didn’t require CD4 to bind co-receptor. We found that the strains requiring CD4 started out with closed spikes, which only opened after binding to CD4. However, the CD4-independent strain of SIV had envelope glycoprotein spikes that were always open, allowing it to immediately bind co-receptor. This provided insight into how HIV binds to and eventually infects T cells.

The figure above is a reconstruction of a single SIV virus particle, imaged using cryo-electron tomography. Individual envelope glycoprotein spikes are colored in purple, the viral membrane is colored green, and the core is colored orange.