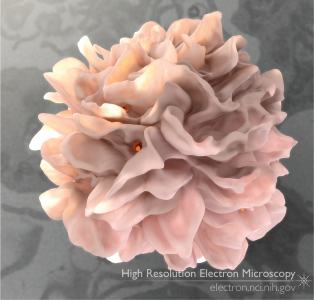 Classic images of dendritic cells show long finger-like appendages flowing around and circling the cell body; these appendages, called dendrites, are the feature that gave rise to the cell type’s name. But in studies published by our lab in 2010-2011, new high-resolution 3D images revealed that the appendages are more like flaps than fingers, and that these flaps capture and trap viral particles of HIV in close proximity to T cells that are targets for HIV infection, vastly increasing the potential for successful HIV entry.

In order to study the 3D structure of the site of HIV transfer from dendritic cells to T cells (the virological synapse), we used a combination of scanning electron microscopy paired with an ion beam (FIB-SEM) for 3D imaging, and transmission electron microscopy (TEM) for visualizing virions. By reconstructing 3D FIB-SEM images of dendritic cells interacting with T cells, and pairing that with higher resolution TEM images of the virological synapse, we pieced together the following story.

HIV generally does not infect dendritic cells. However, these antigen presenting cells scour the environment, picking up potentially dangerous particles. As part of this process, dendritic cells capture HIV virions in their membranous folds. Then, when the HIV-carrying dendritic cell encounters a ready CD4+ T cell, the T cell extends small finger-like appendages towards the dendritic cell. The T cell’s appendages are covered in the CD4 receptor, a molecule that is important for T cell activation. Unfortunately for the T cell, however, HIV then sticks onto the CD4 and follows the appendages back towards the body of the T cell. This interaction, where HIV is passed between dendritic cell pockets and the T cell surface, is called a virological synapse. HIV transfer at a synapse is significantly faster and more efficient than free transfer, meaning that if a T cell encounters and interacts with a dendritic cell with pockets full of HIV, the T cell is at higher risk of getting infected.