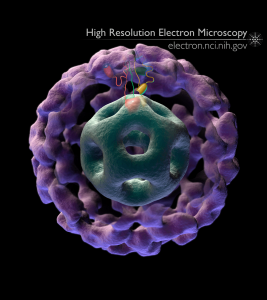 This image shows the inner and outer shells of the large protein machine pyruvate dehydrogenase, which converts pyruvate (derived from sugars like glucose) into acetyl-coA. This is one of many steps necessary for a cell to generate energy, and also provides the building blocks for a variety of molecules that are recycled and reused by the cell.

The image of the pyruvate dehydrogenase enzyme shown here was derived directly from cryo-electron microscopic data. We used a technique called cryo-electron microscopy to image thousands of copies of purified pyruvate dehydrogenase enzyme complexes. In this technique, electrons are shot through a very cold (about – 200C) protein sample towards a detector, which picks up a “shadow” of each protein molecule. Using advanced computer algorithms that can align and analyze thousands of images, these “shadow” snapshots can be used to create a 3D structure of the molecule.

Our video demonstrating pyruvate dehydrogenase at work was featured in the NIH Director’s Blog in 2013.